Hello Sonderlusters! Welcome to entry The First in our #FridayReads column. First – a confession; the hardest part of writing this, for me, is going to be settling on which book to recommend to all of you lovely people. I have indecisiveness down to an art. Also, I really like books. I especially like books featuring excellent female characters. I’ve probably read three great books featuring excellent females in the last couple of months alone (‘probably’ here means yes, definitely). So my method of choosing is probably (definitely) going to be drawing names from a hat or throwing a bunch of books in the air** and seeing which one hits me (literally or figuratively). Don’t expect a pattern is what I’m saying.

But! For this entry I’ve made a deliberate, thought-out choice because it’s the first and I generally have a sense of ceremony. In honour of Wives Tales, an (eventual) play written by a team of talented, Canadian lady-writers, I’ve chosen a book about a wife, written by a talented Canadian lady-writer. Also, I have a weakness for the following things: oceans, adventure, swashbuckling around like a super awesome pirate, history, big boats, general catastrophe, family.

The Sea Captain’s Wife by Beth Powning ticks all of the above boxes. It even has pirates, all though not the awesome swashbuckling kind, more the stabby death, death kind. Point is, it’s a really, really great book (probably one of my top twenty!) that odds are, you probably haven’t read. The only reason I read it in the first place was because of the aforementioned pirate thing, and also the cover was pretty (so sue me). But when I finished it, I carried it around the house for hours clutched to my chest before finally thrusting it aggressively upon my mother and saying “reeeeeeeead thiiiiiiiiiiissssssss”. 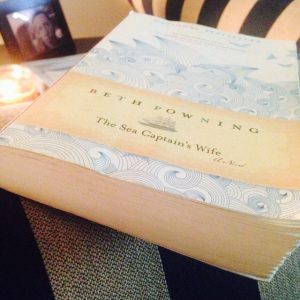 So, the book. Without giving too much away, this is the story of Azuba Galloway, the young wife of seasoned sea merchant Nathanial. As the story opens, Nathanial is at sea (where he has been for many months already), and Azuba and the couple’s four-year-old daughter, Carrie are at home in Whelan’s Cove, near the Bay of Fundy, managing the household all alone. Azuba, like so many young women (literary or otherwise) and always longed for a life of adventure on the open seas. When she married Nathanial he promised her all of those things, but then Carrie came along and he decided it would be better to leave her and the baby behind while he sails away for literally years.

Eventually Azuba, lonely, restless and dealing with her own share of personal tragedy finds herself embroiled in a scandal that arises out of an innocent friendship seized upon by small-town gossip and twisted into something it never was, as small town gossip (literary or otherwise) tends to do. Nathanial, sensing that leaving his wife and child alone anymore is probably causing more problems than it’s solving, finally consents to bring Azuba and Carrie along on his next voyage.

What follows is up for you guys to find out when you go read the book, but it is in turns harrowing, horrifying, touching and fascinating. Azuba is a fresh take on an old trope and Carrie is a particularly successful child character, with real personality and impact, not just a kid for the sake of there being a kid. She says very little compared to the rest of the cast, but her presence and the relationship between her and her parents changes the whole shape and feel of the story.

Also! Get ready to learn stuff. Learning stuff is the best! I retained almost nothing form high school history class, but hand me a historical fiction and I’ll chatter your face off about everything I found out for hours. Like merchant ports, and doldrums, and why pirates are actually really NOT COOL, and that sailing on a ship in 1870-whatever was actually kind of balls.

So, read this book! Learn things! Get inordinately attached to a pet chicken named Harriett! Nope I didn’t make that last part up! Meg, out!