Theatre saved my life. It saved me from my loneliness, from the horror that was high school. It saved me from never feeling like I fit in, never feeling like other people understood me. But most importantly it showed me that I, this eccentric, weird girl that felt invisible growing up, could have a voice… could be seen… people could listen. I learned the power of one’s own story.

I have the women in my life to thank. My mother and my grandmother.

When my mother was growing up in Kingston and going to this awful school, she said being in plays saved her life. It opened her world up. My grandmother was an actress, teacher and writer. She wrote plays and essays and got my mom to go out and audition for her first play. My mother then grew up acting, and soon after theatre school became one of the most successful playwrights in Canada. All the kids in my family acted, it was just something we did, like going to soccer practice or swimming.

A mother at our elementary school directed Shakespeare plays, and my first role was Trinculo in The Tempest in grade five. People laughed and told me good job and I was addicted. When I was little I couldn’t ever fully understand what it was my mother did, or why she talked about such disturbing things. I knew I liked acting but mainly because of the attention I got from it. I liked it in a superficial way, but I couldn’t fully understand why people did plays, why they were important at all.

Until my grade 12 year, when I got a severe autoimmune disease that would lead to some of the darkest years of my life, and I began to understand what theatre could do.

I remember a year after I was diagnosed with my illness I was acting in a play at the Paprika Festival and I could barley even walk or eat.  But I would get myself to these rehearsals because being able to be a part of something, to make something with a group of people, kept me going. Theatre was the only thing that made me feel alive when I was felt like I was dying (at one point I literally was). This need stuck to me as I went to the University of Guelph for Theatre Studies. Fresh off two big surgeries and so emotionally and physically fragile I knew I had to be in a play, I auditioned for roles super sick and in crutches. Being in a play is how I dealt with it, how I could go on because I could be someone else, I could contribute to something with other people. And going through what I went through over those years let me unlock a much deeper understanding of people. This is when I began writing. Writing gave me my own voice as an artist that now had something to say. I wrote poetry mostly and short plays. But I had a goal to write about living with this illness and what it had done to my life. I then went to theatre school, I wrote more and more about living with this disease and turned it into stories and written pieces and conversations that helped to form what would become my first play, My Nightmares Wear White, and a huge part of who I am as an artist.

People often say, “you must feel so much pressure” because of my mother’s success. If you’re doing something because you love it, because you would do it under any circumstance, then no, you do not feel pressure regardless of your mother’s talent or anyone else’s in your community. I have never felt pressure or intimidation, only encouragement, support and love. It is so important to support others’ successes — especially women’s —  in our community and any community. The most important thing my mother and my grandmother taught me is only that I could, that it was possible. For a lot of people, especially women, believing that your voice and story is worth being heard is one of the biggest obstacles. You need to firstly believe in your own story, and the power of what it can do.

I have performed my play My Nightmares Wear White at two theatre festivals and two medical conferences so far, and I have had women come up to me in tears telling me their stories of their sick child, their own battle with cancer, their losses, their darkness each just at heart-wrenching and just as important.

When I sit on the subway and see a woman with children screaming and looking overtired, overworked, I want to know her story.

When I see the homeless lady with no legs at Bathurst and Bloor who screams for spare change everyday at an impressively loud volume, and has some strange relationship with the people who work at the Pizza Pizza, I want to know her story.

When I see the drunk 14-year-old with blue hair who once pushed me in the elevator wandering around the reference library, I want to know her story.

I never ever thought that all the ugly, all the shame, and depression and pain I experienced could turn into to something positive. Art is there for this. Art gives us the ability to take our awful pain and ugliness and turn it into something beautiful, and that is fucking magic.

Thanks theatre, thanks grandmother, thanks mom. Happy day and everyday to you. 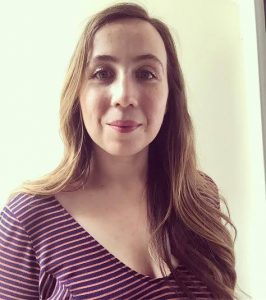 Grace Thompson is a Toronto based theatre creator and visual artist. Her first play, My Nightmares Wear White, was produced in 2015 by The Muddy Mary Project and has since been performed at Summerworks and medical conferences across Canada. Next up — catch Grace in ECM Theatre’s Nourishment at the Toronto Fringe.